Learn about the new features and changes that have been introduced in the new Admin Console for LastPass.

The main differences and improvements made in the new Admin Console for LastPass include:

What is the new navigation in the Admin Console?

The LastPass Admin Console navigation has been updated to dedicated tabs for Dashboard (coming soon!), Users, Applications, Policies, Reporting, and Advanced settings. All corresponding admin controls can be found under each of the respective six tabs. The goal of this navigation is to organize the admin controls in a more streamlined manner.

What is the value of having single sign-on, password management, and multifactor authentication controls in one unified view?

In previous versions of the LastPass Admin Console, single sign-on and multifactor authentication controls were in a separate view. Now, you can secure applications with single sign-on, store credentials with password management, and add an additional layer of security for every login with multifactor authentication – all from one centralized location.

What is the simplified admin onboarding experience?

The simplified admin onboarding experience is a tour of the New LastPass Admin Console, guiding new admins through all of the necessary steps to get up and running right away with their LastPass account. Admins are also guided through the steps for adding users, adding applications, setting policies, enabling multifactor authentication, and adding more admins to the account for ease of account management. 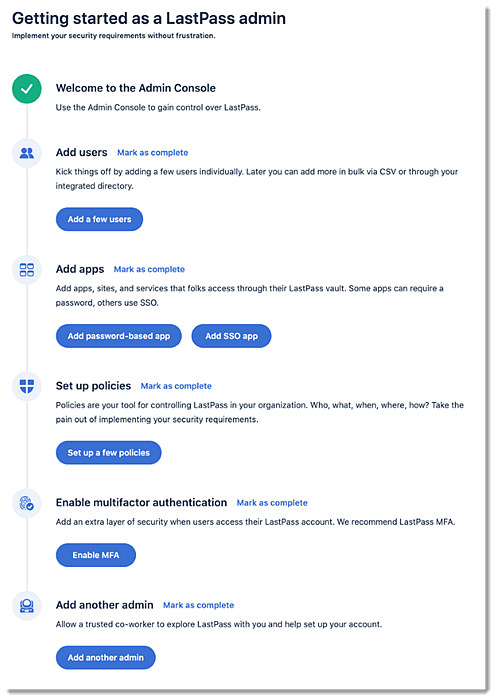 What improvements were made to the user management admin controls?

All users in your LastPass account – including those enabled to use single sign-on, password management, and multifactor authentication – are in a single list, which makes it easier to find specific users. Admins are also able to filter by the account statuses, search by name, and filter by MFA status.

The user account statuses in LastPass allow admins to filter by the status for complete visibility into each user's onboarding journey and take additional action, if needed.

The new account statuses include Staged, Invited, Active, and Expired Invitation; they are defined as:

The existing Disabled and Awaiting Approval statuses remain unchanged, and are continued to be defined as: 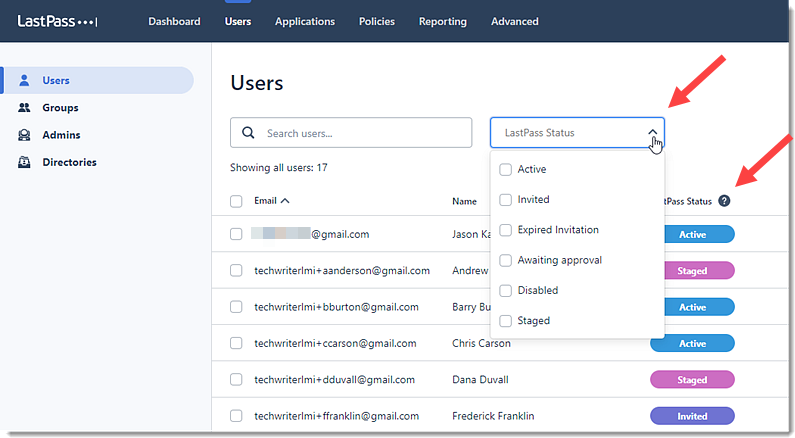 What improvements were made to user details? 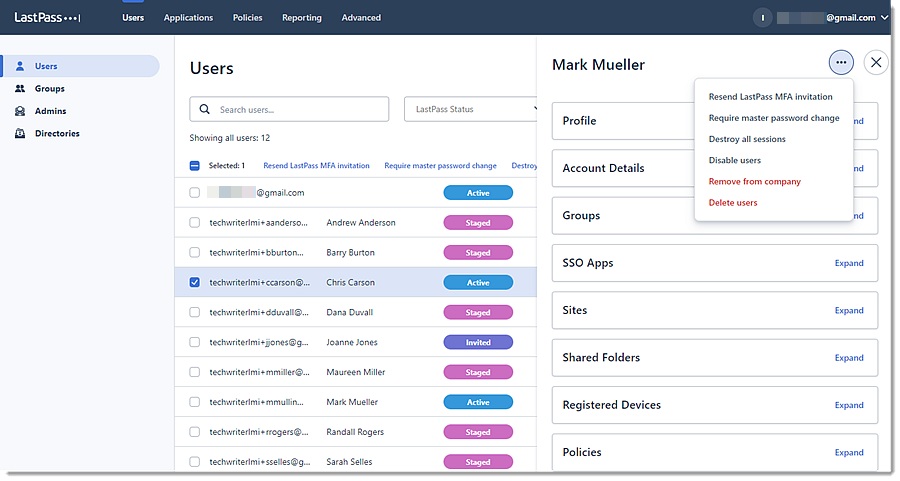 What is the admin management center?

The admin management center is where you can manage all of the admins on your account from a single view. You can add, edit, and remove admins from one streamlined experience.

What’s the difference between Passwordless Status and Enabled Multifactor?