LastPass Enterprise admins can use Push Sites to Users to directly place a Site in a user’s Vault. This can be used to pre-populate a Site in a user's Vault so that it is available when the user first logs in, and to push SAML-specific URLs to services you have linked to your account when using LastPass Single Sign-On.

Please note that the user receiving the pushed Site must log in using the LastPass web browser extension at least once to receive it. If the user logs in via the LastPass website, the Site will not be pushed. 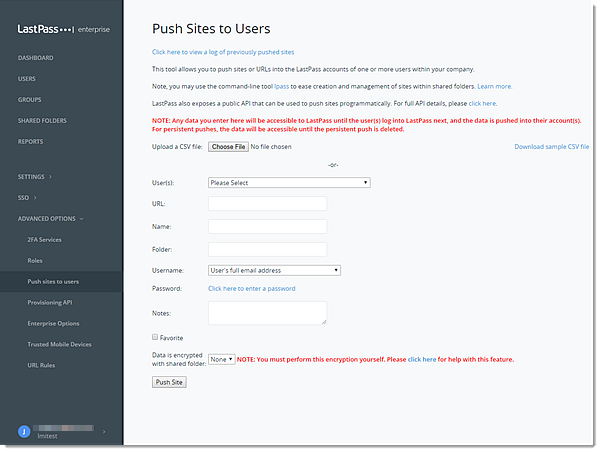 About Push Sites to Users

The following considerations should be noted before using Push Sites to Users:

You can download our sample CSV file, or create your own spreadsheet that matches the title columns and format in our sample file.

You can also add custom fields to your CSV in the following format:

The following is an example using the custom field format:

For your users to receive the pushed Site, they must log out after the Site is pushed and log back in to LastPass using the web browser extension.

You can fill in all of the require fields to push Sites, as follows:

For your users to receive the pushed Site, they must log out after the Site is pushed and log back in to LastPass using the web browser extension.

A Persistent Site push is an optional setting you have when you have elected to push a Site to a group of users or all users within your Enterprise (not individual users). LastPass will keep this Site information on our servers (unencrypted) and push the Site to any new users that are added when you select a Group or All Users as they get added to your business account. Once the users log in via the LastPass web browser extension to receive the Site, the data becomes encrypted in their Vault.

You can view all previously pushed Sites and detailed information about each, and choose to deactivate or delete a Persistent Site.

Use the LastPass Provisioning API